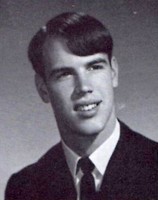 Mr. Denis Wayne Sloan, 62, of San Antonio, Fla., formerly of Lebanon, died Monday, June 4, 2012, at Dade City Regional Hospital in Dade City, Fla. Denis was a native of Lebanon, born on Jan. 12, 1950. His parents were the late William A. Sloan and Bernice (Goldberger) Sloan Enyeart. He was a 1968 graduate of Lebanon High School. He then graduated from Midwestern University of Chicago, where he studied Radio Broadcasting. He was an employee of the Lebanon radio station for a number of years and also was an announcer for Indianapolis motorcycle races. Denis was employed as parts manager at Dryer Honda in Indianapolis, where he made many friends. He also owned and operated two exotic bird and supply stores. He opened Bird Fever in Indianapolis in 1996, then sold it to move to Florida. For the past year, he owned 1 - 2 - Tweet in Brandon, Fla. He appeared with his talking parrots on Channel 6 news many times, as well as on local radio stations in the Indianapolis area. As a member of the Preservation of Parrots (concentrating on Macaws), his interest in large parrots inspired him to donate land in Costa Rica for a bird sanctuary there to help preserve the Macaw. Denis’ other interests included rebuilding and restoring antique gum ball machines and motorcycles, including a recently acquired Harley Davidson. Survivors include one son, Christopher Sloan of Lafayette; one sister, Linda (Ronald) Palmore of Sparta, Tenn.; one granddaughter, Rilee Sloan of Lebanon; four nieces, Alissa (Toby) Parker and Aimee Marion, of Lebanon, Kimberly Barrett of Bellville, Texas, and Wendy (William) Campbell of Cleveland, Ohio; and two nephews, Kevin (Cathy) Price and Zane Palmore, of Frankfort. He was preceded in death by a son, Travis Sloan, and a half brother, Harold W. Sloan. Family Memorial Graveside Services will be held at Oak Hill Cemetery in Lebanon during the week of June 18. Myers Mortuary in Lebanon is handling arrangements, and will announce the time prior to the service. Memorial contributions may be made to a charity of the donor’s choice. - See more at: http://obituaries.reporter.net/story/denis-sloan-1950-2012-718352171#sthash.IIsP1qDw.dpuf