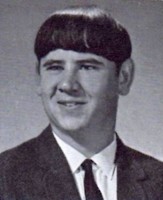 John David Strawmyer, 55, of Lebanon, died Friday, July 9, 2004, at his residence. Born in Lebanon, June 20, 1949, he was the son of the late Lester Strawmyer and Cordelia Wells. He graduated from Lebanon High School in 1968, then from Vincennes University in 1970, with a degree in agriculture. He worked for Wright Bachman in Indianapolis for some time then worked for Carter and Lee Lumber Company in Indianapolis for 18 years. He is survived by three sons, David Strawmyer of Lebanon, Jeffery Strawmyer of Lafayette and Mark Strawmyer of Fishers; a brother Robert Strawmyer of Westfield and a sister, Betty Daniels of Greenwood; and two grandchildren, Josh and Jorden Strawmyer. Visitation is Tuesday from 11 am. To 1 p.m. at Russell and Hitch Funeral Home, 223 N. Meridian St. in Lebanon. Services are set for 1 p.m. Tuesday at the funeral home, the Rev. Glen Jewell officiating. Memorial contributions may be made to the donor’s charity of choice.