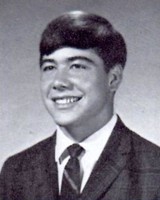 Kenneth Franklin “Frank” Perkins, JR., 42, Bethalto, Ill., died Sunday at Memorial Hospital, Alton, Ill., following an extended illness. He was born in Lebanon Feb. 12, 1950, a son of Kenneth F. and Willa (Logsdon) Perkins who survive and reside in Lebanon. He was married in September, 1981, to Bonnie Mayfield; she survives. A 1968 graduate of Lebanon High School, he attended Ball State University. Perkins worked at E-Z Rake and for Conrail. He and a brother operated a lawn care business in Vincennes. He worked for AMOCO, in Wood River, Ill., from 1987 until retiring due to ill health in July 1991.

Survivors include children Joel and Christopher, both at home; a brother, Michael Perkins, Vincennes, and sisters Linda Gray, Zionsville, and Elizabeth “Libby” Perkins, Zionsville. Graveside services will be 10:30 a.m. Wednesday at Browns Wonder Cemetery with Pastor Jack Stanley officiating. Visitation will be from 6 to 9 p.m. Tuesday at Myers Mortuary. Memorials may be made to the Cancer Society.