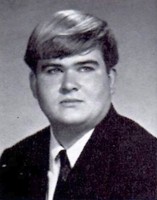 Richard Lee Pedigo, II was born in Indianapolis on April 26, 1950, a son of Richard Lee Pedigo and the late Catherine “Kitty” (Lanham) Pedigo. He attended Lebanon High School and then went on to attend Indiana University in Kokomo. On January 6, 1979, he was married to Jo-Ann (Killion) Pedigo in Speedway, Indiana; she survives. Richard was a longtime resident of Boone County and in 1986 he moved to Frankfort where he had since resided. He owned and operated J & R Automotive for many years, retiring in 1994. He was a member of several auto clubs. A devoted husband, father and grandfather he loved spending time with his family, especially golfing with his sons. Richard was a collector and enjoyed picking up items such as tools, books and car models.

Deceased: In addition to his mother, he was preceded in death by a granddaughter, Abigail Pedigo.

Memorials may be made to assist the family c/o Myers Mortuary, 1502 North Lebanon Street, in Lebanon, Indiana.