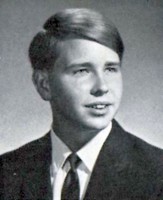 Thomas "Tom" Nelson Hoag (64) passed away at his home on Saturday, April 12, 2014. He is survived by his beloved younger brother, John "Tim" Hoag of Charlotte; his two children, Daniel Hoag of Mountain View, CA, and Sarah Snyder (Brian) of Greenville, SC; and his grandson Watson Cal Snyder. He was preceded in death by his father, Thomas Moody Hogg of Balnamore, N. Ireland, and Mary Jane Hogg of Grand Rapids, MI. He was born in Indianapolis, IN on February 21, 1950. He graduated from Lebanon High School in Lebanon, IN, in 1968 and earned his B.S. in Mechanical Engineering from Purdue University in 1974. He loved animals, especially his beloved toy poodle Rosie and cat "Jenny Bird". He also loved cars, and taught his kids how to change the oil and brakes before they could drive. He was a master handy-man, who lent his services to anyone in need. He enjoyed golfing and tennis with his friends and family, and loved to take pictures of everything. He also took up dancing in his later years, and loved to attend dancing events. He often met friends for standing breakfast and lunch dates and enjoyed talking with people. Amongst many other good qualities, Tom will be missed the most for his wit and his ability to make people laugh. Tom's family will receive friends from 5-7pm. Monday, April 21, 2014 at J.B Tallent Funeral Service, 1937 Sharon Amity Rd. In lieu of flowers, please send any donations to the Humane Society Disaster Relief Fund.