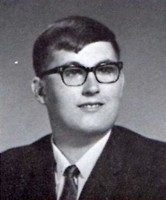 John Duane “J.D.” Denhart, 63, died Monday, Dec. 30, 2013. J.D. was known for his animated storytelling, his down home charm, and his love for people and animals. J.D. never knew a stranger. He was quick to make friends with people, learning about their stories, asking them about their day and telling them about his life experiences from growing up in Indiana to driving a tractor-trailer across the cities and towns of North America. His quick wit laced with his stories about catching fish around the Great Lakes, collecting antiques that fueled his love of history and watching hours of John Wayne movies and Rawhide episodes, made him relatable to people.. His magnetism shined through his large blue eyes, infectious laugh and goofy sense of humor. From an early age, J.D. cleaved to importance of family. He lived in a rural area of Boone County, where he grew up with his two younger siblings, parents and grandparents. The family worked together on a farm and raised swine for decades. J.D. spent hours grooming, caring and training his pigs for upcoming county 4-H fairs, where he won grand champion prizes and dozens of ribbons. Throughout his life, he proudly displayed a Hampshire pig figurine in his house to remind him of those nostalgic days on the farm. After graduating Lebanon High School in 1968, J.D. attended Purdue University and was a lifelong Boilermakers fan. He became a father to two children, Jennifer and John Lucas, and worked at Dow Chemical for nearly a decade before driving a tractor-trailer across North America. By driving around the country and Canada, he was able to see what made other cities great, eat at local hot spots and make new friends along the way. Because of his knowledge of the country from his travels, J.D. was like a human atlas – always knowing the best route to take without looking at a map. He would even include stories and places to go along the way. He loved to travel, be around people and try new things. While on the road, J.D. met his wife of 32 years, Corinna, in northern Indiana. He loved her completely. He would make sure to tell her how much he loved her at least once a day and wrote poems for her to remind her of his undying love.. The couple had two children, Sara and Samuel, and raised them in Ottawa Lake, Mich. As his children grew up, he spent countless hours as a coach for softball, baseball and basketball teams in the community. He would volunteer hours at his children’s elementary school, teaching the students how to use computers and emerging technology. In addition to his time spent volunteering at his children’s school, J.D. went back to school for himself. Even though he was an adult learner and was raising a family, J.D. received his diploma with academic honors and was a member of Phi Theta Kappa Honor Society. He earned a degree in drafting and design from Monroe County Community College. Upon graduation, he went to work at Applied Technologies Inc. in Toledo, Ohio, where he worked for about a decade, designing automotive parts for major car manufacturers. The family lived in Michigan for more than 20 years until the couple moved to Nevada five years ago. In retirement, J.D. loved to go to hot rod shows to see all the classic muscle cars he grew up with, to add more sports trading cards to his vast collection that was amassed over his six decades of life, and to spend time with his family, doing new things or visiting new places. He loved keeping up with his grandchildren, taking photographs with his old Canon camera, and spending hours tending his virtual garden while visiting with old classmates, neighbors, family and friends online. He is survived by his wife, Corinna Kittle Denhart of Las Vegas, Nev.; two daughters, Jennifer Baldwin-Wells of Commiskey, and Sara Denhart of Scottsburg; two sons, John Lucas Denhart of Clarksville, Tenn., and Samuel Denhart of Ottawa Lake, Mich.; several grandchildren; mother Violet Denhart Sanders of Ottawa Lake, Mich.; one brother and sister-in-law, Dennis and Shirley Denhart, both of Dundee, Mich.; one sister and brother-in-law, Doreen and Tim Meisner, both of Toledo, Ohio; and many aunts, uncles, nieces, nephews and cousins. He is preceded in death by his grandparents, Elmer and Mabel Denhart, and his father, John Thomas Denhart, who died in 1999. Cremation was chosen. A memorial service will be held in April to celebrate J.D.’s life. Online condolences may be made at www.kraftsussman.com. - See more at: http://obituaries.reporter.net/story/john-j-d-denhart-2013-718361271#sthash.8hr0Edzp.dpuf