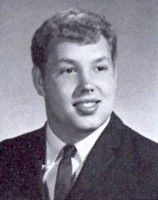 Dennis Keith Chitwood, 66, passed away Wednesday morning, December 2, 2015, at his home in Lebanon, Indiana. He was born on June 16, 1949 in Indianapolis, a son of the late Paul Kenneth and A. Martha (McLean) Chitwood.

At a young age Dennis’ family moved to Lebanon where he attended Lebanon schools. He was a 1968 graduate of Ben Davis High School. Dennis worked many years as a self-employed electrician in the Boone County area. He loved attending his grandchildren’s sporting events and enjoyed racing winged sprint cars, riding his motorcycle, and camping. Dennis was a former member of the Lebanon Eagles.

In addition to his parents, Dennis was preceded in death by a sister, Rosemary Charlene Brown and a brother-in-law, Larry Kruszewski.

Memorials may be made to Myers Mortuary to assist the family.